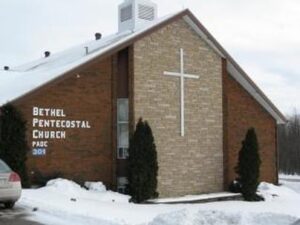 Non-conformist churches (protestant churches) are churches that are not Anglican or Catholic. The design of such churches is usually square or rectangular and modern in design.

The focal point of protestant churches is the pulpit. This is because the preaching of the word of God is seen as the most important activity. Instead of an altar, there is a communion table. In these churches, items used by Catholics such as statues and candles are not used.
ORTHODOX CHURCH

The Orthodox Church came about when there was a split from the Catholic Church because of disagreements over certain beliefs.

Orthodox Churches are usually built in the shape of a cross or square. In the center is a large dome.

Inside an Orthodox Church you will find:

The iconostasis is a screen covered with icons which is front of the altar. These icons are religious pictures. Only the priest is allowed behind the iconostasis when he is conducting the Holy Liturgy, which is also known as Holy Communion and Mass. You will also find a nave, font, pulpit, lectern, and altar.

Inside an Anglican Church you will find the following features:

The altar is set up in front of the nave. The altar is the focal point of the church. The altar is used for the sacrament of Holy Communion. On the altar, you will find an open Bible, candles, and a crucifix. Inside the Anglican church you will also find:

The nave
The lectern
The pulpit
The chancel
The font

The Catholic Church had it origin in the old Roman Empire. By the third century CE there were thousands of Christians there as Christianity began to spread throughout the empire. Today roughly six out of every ten Christian is a Roman Catholic.

Inside a Catholic Church you will find the following features:

·        Fourteen pictures called “the stations of the cross.
These pictures depict the moments leading up to
Jesus’ crucifixion.

·        The confessional is a private booth where persons
can go to confess their sins to a priest.

·        The Lady Chapel is a room that is dedicated to the
Virgin Mary. Inside is a statue of her.

PLATE TECTONICS
Each of these slabs or pieces of the earth's crust...

LAND POLLUTION
With the massive growth of the world’s population, there is...

GROUPS
A group is a collection of individuals bonded by similar...

TYPES OF RESOURCES
A resource is anything that can be used to create...

DIGESTIVE SYSTEM
Food is made up of complex molecules that need to...