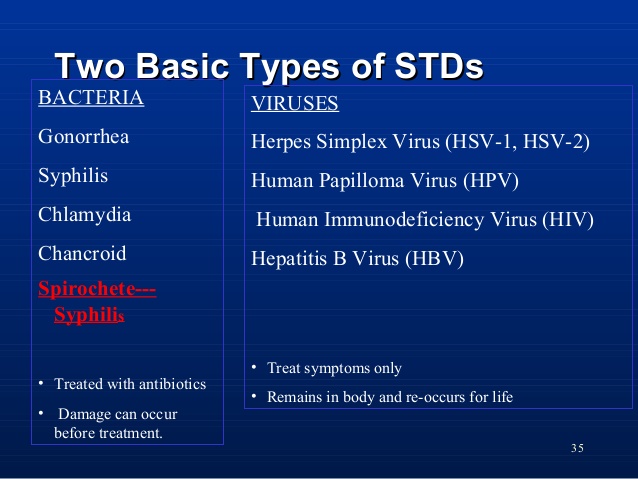 Symptoms of Gonorrhea:
Burning sensation when passing urine
The presence of pus from openings on the sex organs

A pregnant mother who has the infection can result in the baby becoming blind if the bacteria gets into their eyes during birth.

Symptoms of Chlamydia
Often there are no visible symptoms
Sometimes the person feels a burning sensation when urinating or a whitish discharge from the penis or vagina.

Consequence
Blisters and sores incur pain and discomfort. The infection also spreads to close by areas of the body where blisters burst

Symptoms of hepatitis B
Damaged liver resulting in bile getting into the bloodstream.
The eyes and skin take on a yellowish appearance and wastes (stool and urine) become discolored.

Consequences of hepatitis B
Damage to the liver can lead to liver cirrhosis, cancer and
eventually death

The Human Immune Deficiency Virus (HIV) which causes AIDS, lives in body fluids. It is transmitted through sexual intercourse, sharing an infected needle, blood transfusion with contaminated blood, and breastfeeding.

Consequences of Aids
The HIV virus attacks the white blood cells which are a vital part of the immune system. This lessens the body’s ability to fight infections.

As the disease progresses the patient suffers various consequences such as:

Damage to organs such as the heart, lungs, and kidneys
Skin cancer
Pneumonia
Eventually Death

TEEN PREGNANCY
Teen pregnancy has become very prevalent in many societies. Many...

CONTINENTAL DRIFT
Evidence suggests that the Earth had only single massive continent...

CHRISTIAN LEADERS
POPE POPE The Pope is the leader of the Catholic...

WATER AS A RESOURCE
Water is a substance that sustains all life. Water covers...